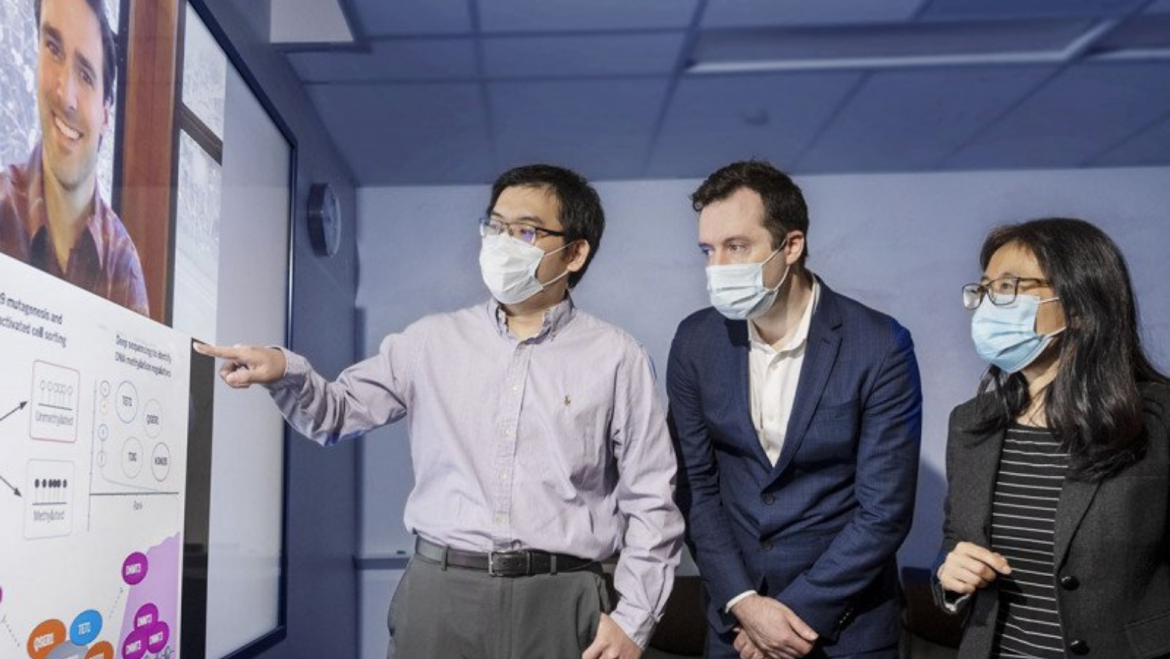 The DNA in our genes contains the instructions needed to manufacture all of the proteins in our cells. These proteins, in turn, do the work that keeps our bodies functioning. Therefore, knowing how individual proteins get made can help us understand the causes of human disease, including cancer.

In the April 9, 2021, issue of Science, Sloan Kettering Institute scientists report that they have found new clues about a vital part of the protein-making process. In doing this, they also discovered a gene, called QSER1, that oversees some of this activity and helps explain why certain genes get used to make proteins at certain times.

“Finding this gene is exciting and unexpected, but it’s only the beginning,” says SKI developmental biologist Danwei Huangfu, one of the senior authors of the paper. “I think it will take my lab in a direction that we were not expecting to go.”

The process studied by Dr. Huangfu and her team is called DNA methylation, and it is one of the factors that influences which genes end up making proteins. Methylation involves attaching chemical components called methyl groups to the strands of DNA. Excessive methylation has been linked to developmental disorders and cancer. The enzymes that attach and remove methyl groups have been studied for many years, but until now, the processes that control the activity of these enzymes have not been well understood.

Dr. Huangfu says it helps to think of the various enzymes that add and remove methyl groups as workers that either paint walls or remove paint from walls. “You want to make sure they are controlled properly,” she says. “You don’t want them randomly adding or removing paint. There have to be managers that make sure the workers do the right job — DNA methylation needs to be present or absent in the appropriate places for the genome to function properly.”

The new paper is an important step in understanding the role of the managers (the regulators) that tell the workers (the enzymes) what to do.

To find those managers, the team first needed a way to visualize and monitor DNA methylation. “If you think of the genome as a large building, you realize that we can’t have our eyes everywhere at the same time,” Dr. Huangfu says. “It’s just too big. So, we found one room where we know excessive painting happens when mismanagement issues occur, and we just concentrated on that area.”

The room they selected was a gene called PAX6, which they knew was prone to show abnormally high levels of methylation under disease conditions.

Next, using the gene editing technique CRISPR, graduate student Gary Dixon, the paper’s co-first author, who just earned his PhD in Dr. Huangfu’s lab in the Developmental Biology Program, developed a library of cells in which each cell had just one gene removed. By looking at what happened to the cells when particular genes were removed, he was able to determine which genes influenced methylation in the area around the PAX6 gene. QSER1 rose to the top.

QSER1 had previously been associated with certain diseases, including Parkinson’s and type 2 diabetes, but nothing was known about what it does. “That’s the beauty of doing this kind of broad study — it leads you to unexpected places,” Dr. Huangfu says. “Because the function of this gene was not previously understood, anything we learn about it will be new and exciting.” It’s possible that mutations in QSER1 may be directly connected to certain diseases, but more research is needed. 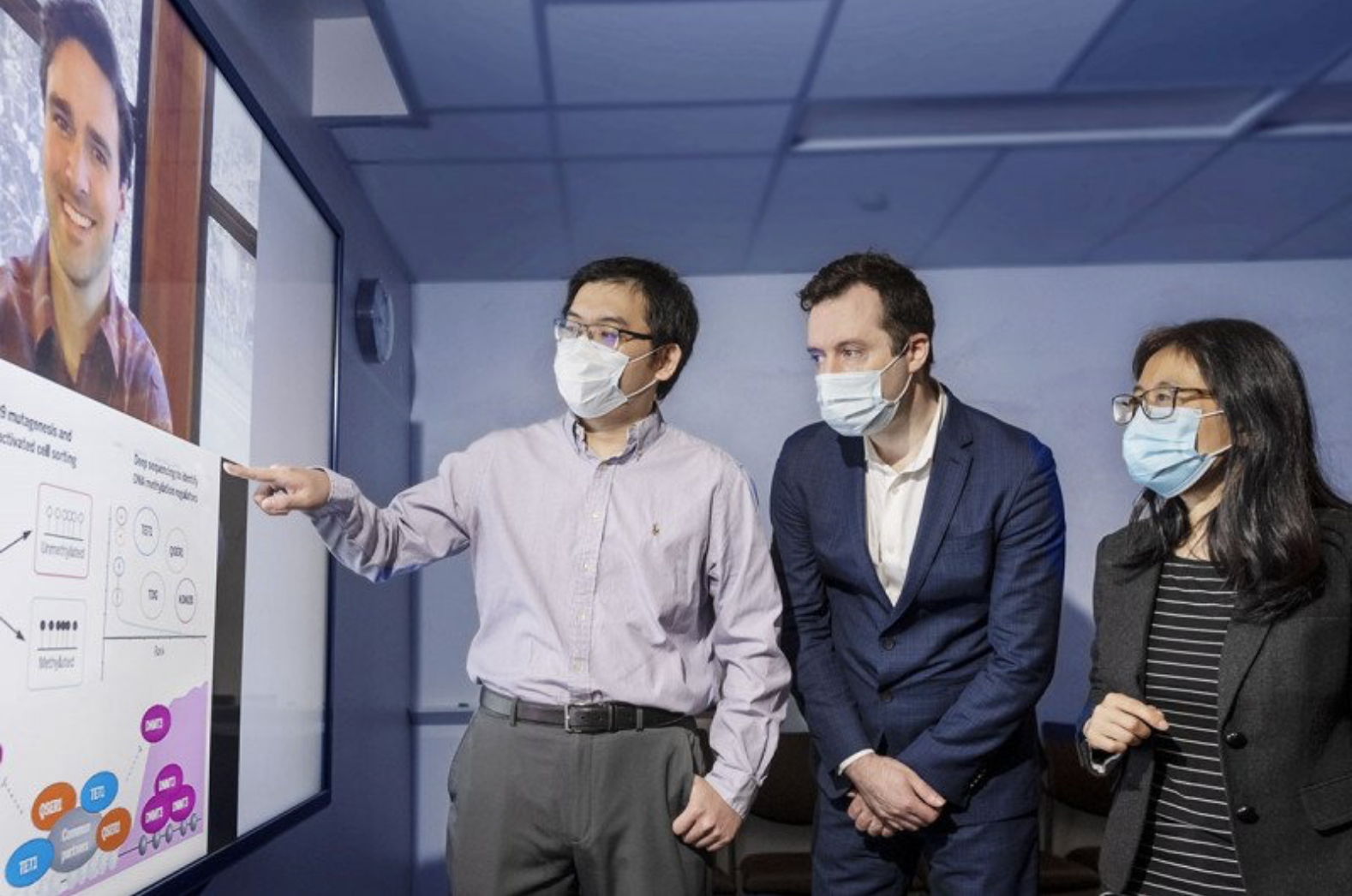 Dr. Huangfu explains that this open-ended approach, in which many different genes are studied at the same time, is important for making new discoveries. She and her colleagues, including the paper’s co-first author Heng Pan and co-senior author Olivier Elemento, Ph.D., both computational biologists [at the Englander Institute for Precision Medicine] at Weill Cornell Medicine, will continue to study QSER1 as well as other genes discovered in their research to learn more about how these genes affect DNA methylation.

This project used human embryonic stem cells, an important tool for learning about gene regulation. Dr. Huangfu also uses these cells to study how the pancreas develops — research that has implications for understanding both pancreatic cancer and diabetes.

“Because we can’t do research directly on humans, human embryonic stem cells are a good research tool,” she says. “These cells are amazing because you can grow bucketloads of them. And you can’t do this kind of genome-scale screening research unless you have a lot of cells.” Based on the discoveries from human embryonic stem cells, the Huangfu lab is now examining mice lacking Qser1 and other critical genes. They are also collaborating with Todd Evans’s lab at WCM to study the effect of these genes in mutant zebrafish. “We believe taking a multidimensional approach is critical to understanding the mechanisms of gene regulation as well as the physiological impact of dysregulation,” Dr. Dixon says.

Dr. Huangfu adds that it’s difficult to get funding for this type of comprehensive screening research. “Funding agencies generally support research that’s hypothesis-driven, rather than this kind of open-ended work,” she says. She says she’s grateful to the Starr Foundation’s Tri-Institutional Stem Cell Initiative for funding this work and other research that uses human embryonic stem cells.

The above article originally appeared on the Memorial Sloan Kettering website on April 09, 2021.