The Next Life-Saving Innovation Developed Only for You 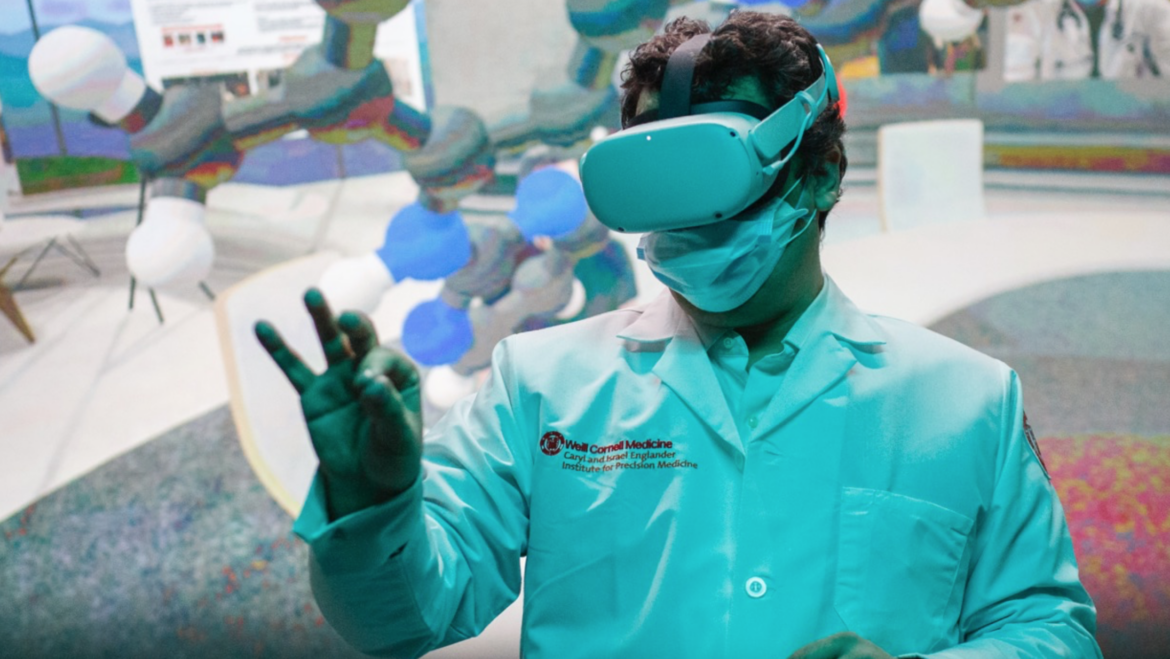 When most people think of making technology more personalized, they imagine chatbots, or artificial intelligence programmed to speak in a human voice that turns search-engine output into small talk.

At Weill Cornell Medicine in New York City, personalized technology can mean the ability to map a patient’s entire genetic code in the time it takes to watch a movie, or tracking flecks of DNA in the blood to assess if a disease treatment is working.

These are just two of the hyper-focused strategies of precision medicine. This emerging and highly innovative approach – one rooted in the specificity of patients’ genes, medical and family history– seeks the personal at the cellular level. 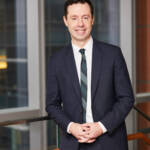 “It’s obvious that medicine has always, to the extent possible, been personalized,” said Dr. Olivier Elemento, Director of the Caryl and Israel Englander Institute for Precision Medicine at Weill Cornell Medicine. “But what precision medicine offers is a much more personalized medicine, driven by technology.”

Ultrafast DNA sequencing generating billions of data points for a single patient and image-recognition AI, which can often scan medical images and detect disease in new patients faster than trained professionals can, are just two of these emerging technologies. 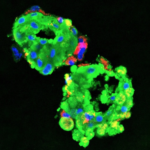 There are around 10,000 diseases that affect humans – each of whom, it should be noted, currently generate around 80 megabytes each year in imaging and electronic medical record data. Powerful technology is critical for precision medicine, because the numbers are not on the side of personalization.

“Our end goal is to find the patterns and the precision within all that information so that each individual receives a highly effective treatment tailored to their disease, not just to the ‘average patient.’”

There’s virtually no way to turn giant swaths of available patient data into actionable treatment and prevention strategies without several disciplines at the center of Weill Cornell Medicine’s approach.

The first step in precision medicine is the development of tests by pathologists that give context to the specific disease, according to Dr. Massimo Loda, Chair of the Department of Pathology and Laboratory Medicine at Weill Cornell Medicine. Pathology is considered a bridge between science and medicine. Scientists working in pathology are experts in the molecular basis of disease.

Second, there’s genomic medicine. DNA-sequencing researchers use genomics to understand the particular ways a patient’s cells are mutating and causing disease, which can then help identify possible benefits from unexpected or experimental drug treatments. 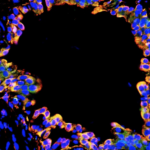 These specialties intersect in innovative ways. Elemento cites the example of tumor research that begins with interpretation, diagnosis and sequencing by pathologists, followed by data-analysis by computational biologists. Such research is augmented by novel, data-rich ways to deliver personalized medicine for cancer patients.

“We can grow tumor cells outside of a patient’s body, then use robotic screenings to test thousands of drug combinations to fight the tumor,” he said.

Armed with gene sequencing, researchers can get creative with drug treatments

As in any corner of medicine, patient stories are what make abstract innovations feel personal.

One that fuels the sense of purpose at Weill Cornell Medicine is the story of a recent patient who, after years of troubling symptoms, ultimately received a grim diagnosis of acute myeloid leukemia (AML).

AML is a rare blood cancer, and the patient feared for her odds of survival as her case seemed dire. But her oncologist referred her case to scientists at the Englander Institute, who made a genetic discovery that the patient’s genome clustered two genes not typically found together.

That discovery then helped scientists in the Sandra and Edward Meyer Cancer Center and the Weill Cornell Graduate School of Medical Sciences research the mutation and determine an experimental drug typically earmarked for another type of tumor could save this patient.

This detail-minded collaboration – precise in its focus to a specific patient – proved successful, resulting in remission.

Historically, precision medicine has most often been applied to cancers. There are several reasons for this; one is that cancer can be biopsied and sequenced relatively easily, thus generating a detailed map of each patient’s disease that can be used to tailor therapy. Another reason is that there is a fast-growing number of targeted anticancer drugs that work only when tumors have certain genetic mutations. However, precision medicine’s approach – the idea that therapy can be tailored to each patient based on a detailed map of each patient’s disease – is not specific to cancer.

Weill Cornell Medicine’s strides in precision medicine to treat cancer are opening pathways into treating other conditions. These expansions include brain disorders, diabetes, heart disease, neurodevelopmental disorders and infertility. Weill Cornell Medicine has started using precise genomics techniques to map mutations in some of these diseases.

“With these stubborn diseases, a personal approach, at the molecular level, is often what makes all the difference,” said Dr. Augustine M.K. Choi.

Choi is the Stephen and Suzanne Weiss Dean at Weill Cornell Medicine, an academic medical center comprised of practitioners in a hybrid sense: many are “physician-scientists” who are in an endless pursuit of advancing care for their patients through discovery.

“It keeps us up at night when traditional standards of care aren’t working for a patient,” said Choi who is also provost for medical affairs of Cornell University. “Our physician-scientists are tirelessly pursuing ways to bring all these strands together to find insights into each patient’s unique genetic ecosystem.”

Often, that scientific method points to experimental drug treatments, or an existing drug earmarked for an entirely different condition.

For Loda, those discoveries are the result of questioning the conventional wisdom of drug development.

“That tends to mean that if clinical trial results show efficacy in a majority of patients, the drug is deemed to be effective,” he said. “However, if that same drug is only effective, say 5 percent of the time, then it will be sidelined. However, that group of patients may have an underlying genomic alteration that renders the drug effective. Thus, we should change how we conduct trials.”

At the heart of precision medicine, Loda said, is returning to that 5 percent deemed too small to matter. To him, this demonstrates the democratizing nature of the field, as we’re all likely to be in the 5 percent effectiveness group for one of the thousands of diseases out there.

This focus on the underrepresented in medicine also extends to ensuring an ethnically diverse patient database.

“We need to get granular and understand what a population is suffering from and address that population in a precise fashion,” said Loda.

To find the personal within the data, specialists turn to AI

The growth rate for healthcare data is projected to outpace massive data-generating industries like manufacturing and media. To that end, the precision medicine specialists at Weill Cornell Medicine know that cutting-edge computational technologies are one of their greatest allies. Running parallel to the biomedical innovations, there are cutting-edge innovations in AI required to identify patterns and predict outcomes. 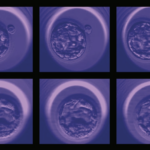 Embryologists use microscopic images like these to help assess the quality of human embryos as they develop. Images courtesy of Dr. Pegah Khosravi; colorization by Jen Infante.

The functions of these AI systems are as diverse as the patient population. To improve in vitro fertilization (IVF) outcomes, a new AI application automatically assesses digital images of post-fertilization embryos to select the embryo with the highest chance of implantation and live birth. Designed by Weill Cornell Medicine investigators led by Drs. Zev Rosenwaks and Nikica Zaninovic in the Center for Reproductive Medicine, and in collaboration with Englander Institute scientists, the application surpasses what is possible with the naked eye. The process could lower the risks of multiple pregnancies or reduce the time it takes for patients to become pregnant.

With blood clots being a frequent complication of hospitalizations, another system developed at Weill Cornell Medicine uses a combination of genetics and AI to flag people most at risk for developing them.

“Armed with this intelligence, we might treat high-risk patients with more active anticoagulant medication prior to hospitalization,” Loda said. “Thus, the objective of precision medicine is to keep patients out of the hospital for as long as possible.”

Seeking investment to fuel the future of precision health

Funding the technologies and new biomedical approaches to expand beyond precision medicine into precision health is the beating heart of an ambitious $1.5 billion campaign Weill Cornell Medicine is calling “We’re Changing Medicine.”

With $850 million already raised, the effort is designed to shore up the bench-to-bedside discovery pipeline that is central to the personalized nature of precision medicine and its prevention-minded corollary, precision health, said Choi. Precision health complements Weill Cornell Medicine’s work in precision medicine but focuses on preventing disease before it starts with a greater emphasis on public health.

“Our large, diverse patient base here in New York City puts us in a unique position to gather the data needed for precision health that will ultimately help with disease prevention strategies across populations,” Choi said. “The major investments in precision health we envision will allow us to utilize data on patients’ risks, genomics, behaviors and environment in order to identify disparities and promote health equity, which the pandemic has highlighted the urgency to address.”

The above article originally appeared on the Bloomberg website on March 07, 2022.