Your Doppelgänger Is Out There 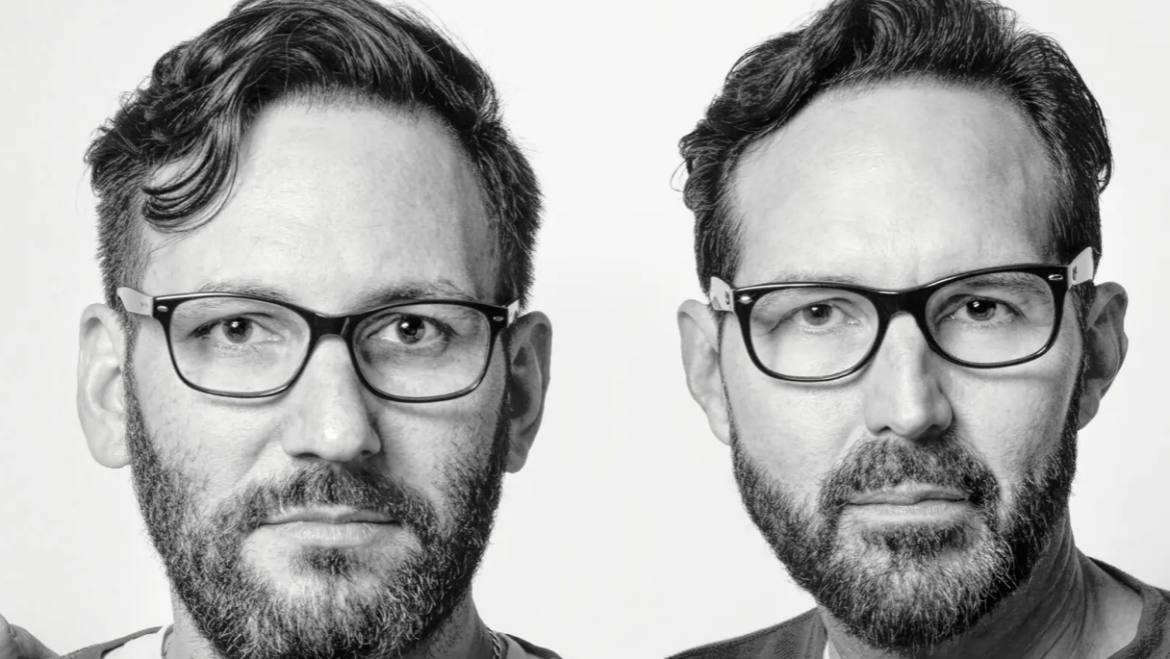 That person who looks just like you is not your twin, but if scientists compared your genomes, they might find a lot in common.

Charlie Chasen and Michael Malone met in Atlanta in 1997, when Mr. Malone served as a guest singer in Mr. Chasen’s band. They quickly became friends, but they didn’t notice what other people around them did: The two men could pass for twins.

Mr. Malone and Mr. Chasen are doppelgängers. They look strikingly similar, but they are not related. Their immediate ancestors aren’t even from the same parts of the world; Mr. Chasen’s forebears hailed from Lithuania and Scotland, while Mr. Malone’s parents are from the Dominican Republic and the Bahamas.

The two friends, along with hundreds of other unrelated look-alikes, participated in a photography project by François Brunelle, a Canadian artist. The picture series, “I’m not a look-alike!,” was inspired by Mr. Brunelle’s discovery of his own look-alike, the English actor Rowan Atkinson.

The project has been a hit on social media and other parts of the internet, but it’s also drawn the attention of scientists who study genetic relationships. Dr. Manel Esteller, a researcher at the Josep Carreras Leukaemia Research Institute in Barcelona, Spain, had previously studied the physical differences between identical twins, and he wanted to examine the reverse: people who look alike but aren’t related. “What’s the explanation for these people?” he wondered. 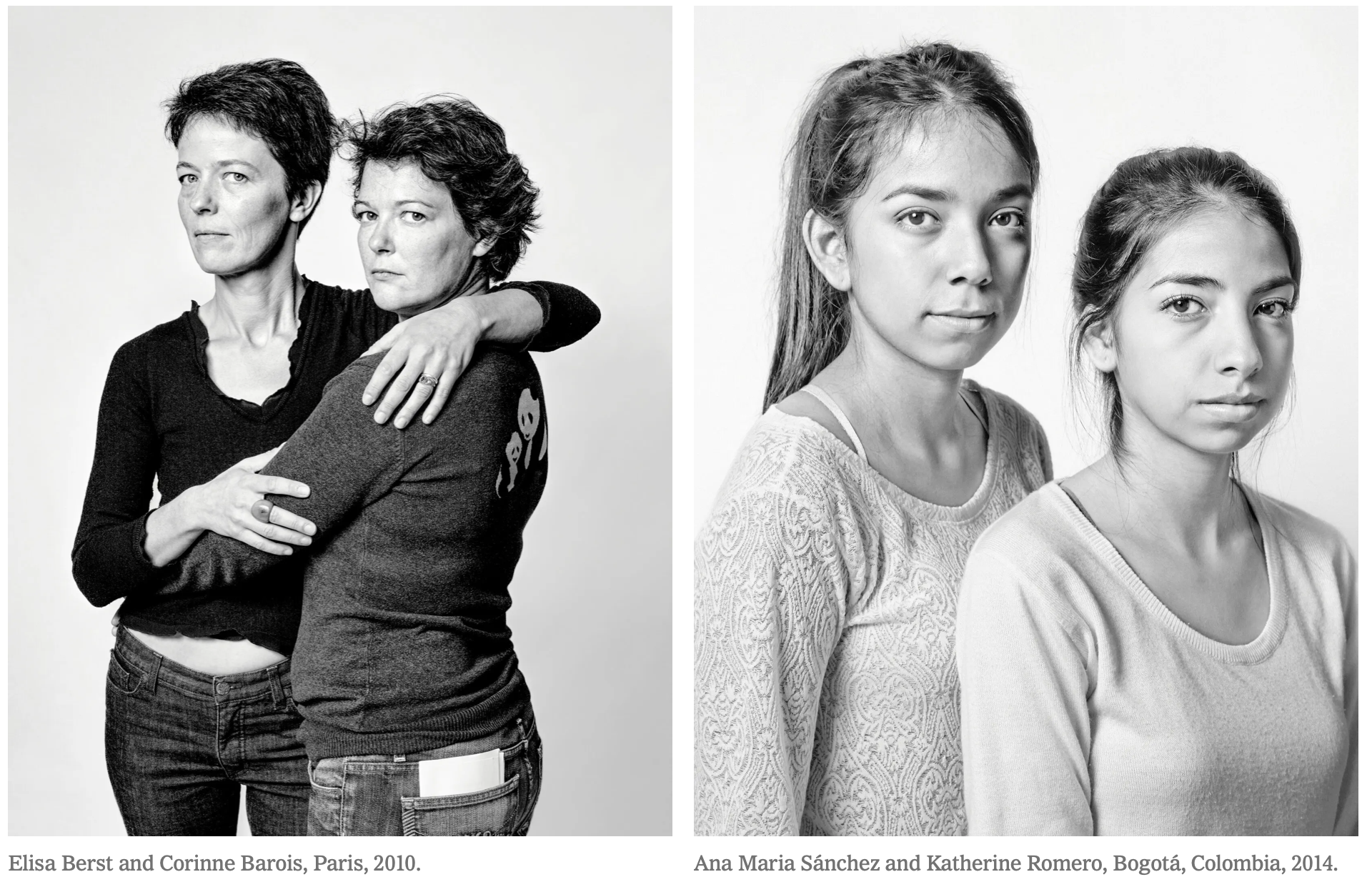 In a study published Tuesday in the journal Cell Reports, Dr. Esteller and his team recruited 32 pairs of look-alikes from Mr. Brunelle’s photographs to take DNA tests and complete questionnaires about their lifestyles. The researchers used facial recognition software to quantify the similarities between the participants’ faces. Sixteen of those 32 pairs achieved similar overall scores to identical twins analyzed by the same software. The researchers then compared the DNA of these 16 pairs of doppelgängers to see if their DNA was as similar as their faces.

Dr. Esteller found that the 16 pairs who were “true” look-alikes shared significantly more of their genes than the other 16 pairs that the software deemed less similar. “These people really look alike because they share important parts of the genome, or the DNA sequence,” he said. That people who look more alike have more genes in common “would seem like common sense, but never had been shown,” he added. 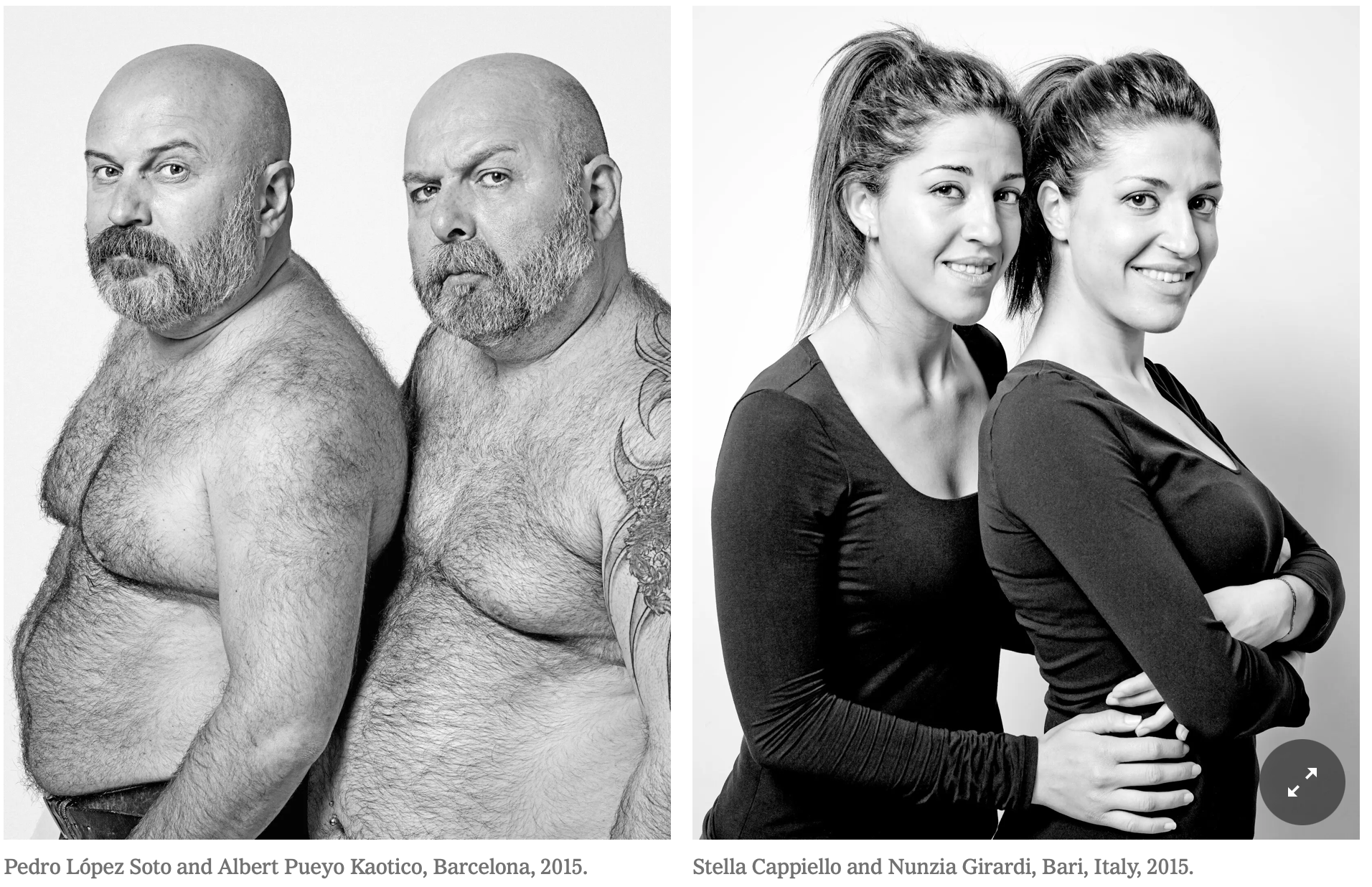 However, DNA alone doesn’t tell the whole story of our makeup. Our lived experiences, and those of our ancestors, influence which of our genes are switched on or off — what scientists call our epigenomes. And our microbiome, our microscopic co-pilot made up of bacteria, fungi and viruses, is further influenced by our environment. Dr. Esteller found that while the doppelgängers’ genomes were similar, their epigenomes and microbiomes were different. “Genetics put them together, and epigenetics and microbiome pulls them apart,” he said.

This discrepancy tells us that the pairs’ similar appearances have more to do with their DNA than with the environments they grew up in. That surprised Dr. Esteller, who had expected to see a bigger environmental influence. 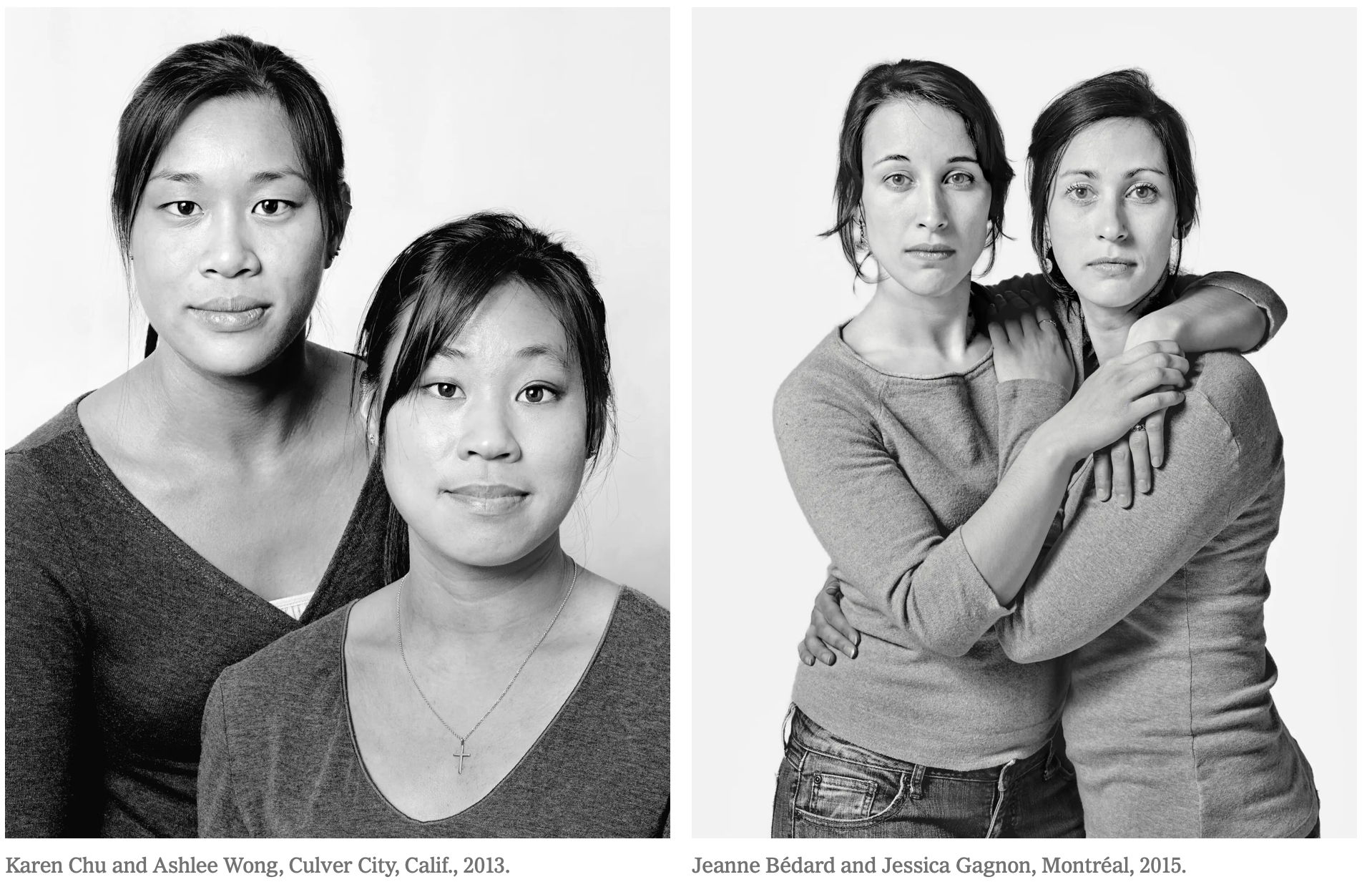 Because the doppelgängers’ appearances are more attributable to shared genes than shared life experiences, that means that, to some extent, their similarities are just the luck of the draw, spurred on by population growth. There are, after all, only so many ways to build a face.

“Now there are so many people in the world that the system is repeating itself,” Dr. Esteller said. It’s not unreasonable to assume that you, too, might have a look-alike out there.

Dr. Esteller is hopeful that the study’s findings will help doctors diagnose illness in the future — if people have similar enough genes to look alike, they might share predilections for diseases too.

“There seems to be something pretty strong in terms of genetics that is making two individuals who look alike also having genome-wide similar profiles,” said Olivier Elemento, Ph.D., the director of the Englander Institute for Precision Medicine at Weill Cornell Medicine in New York, who was not involved with the study. Discrepancies between DNA’s predictions and people’s actual appearances might alert doctors to problems, he said. 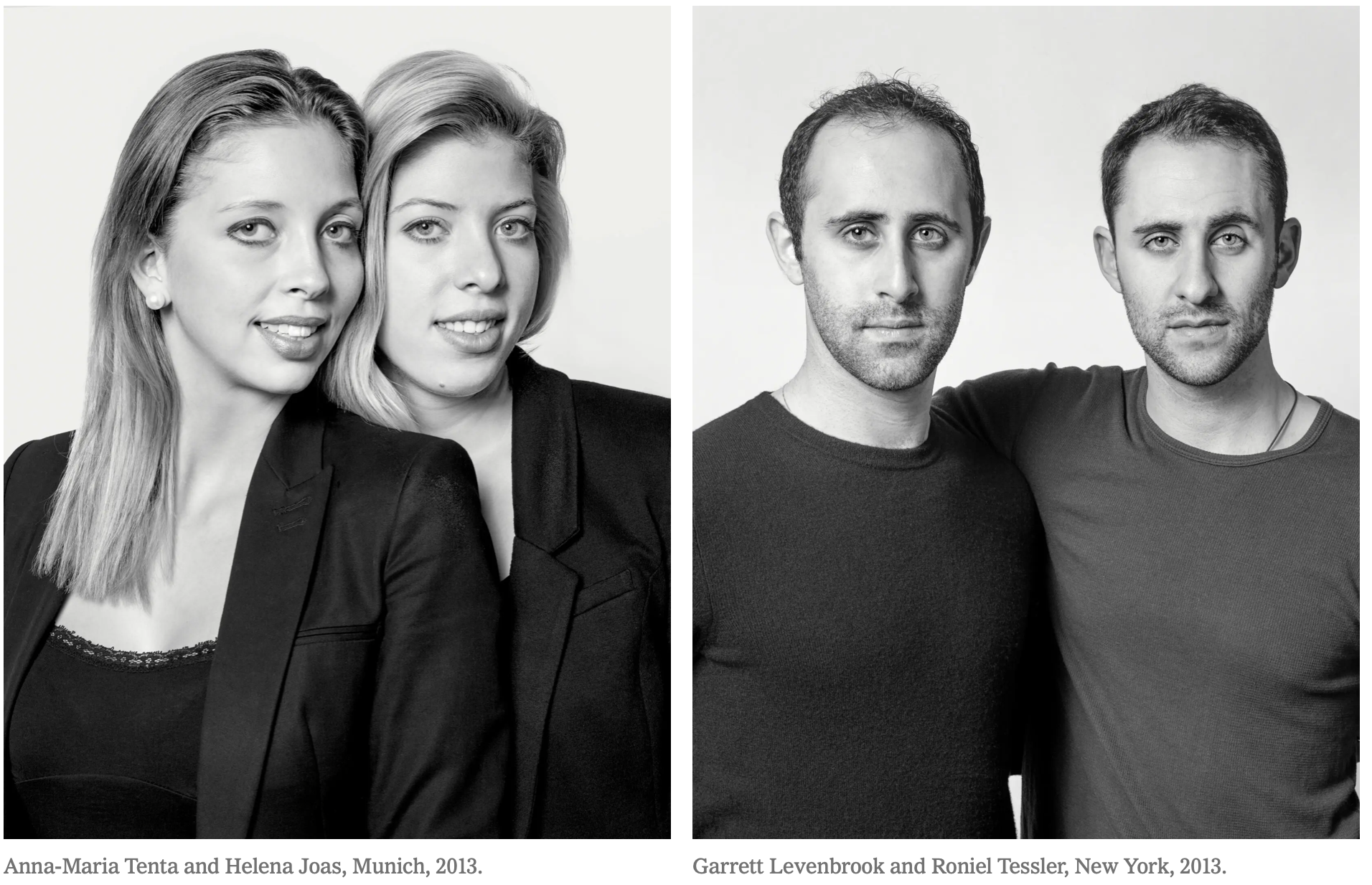 Dr. Esteller also suggested that there could be links between facial features and behavioral patterns, and that the study’s findings might one day aid forensic science by providing a glimpse of the faces of criminal suspects known only from DNA samples. However, Daphne Martschenko, a postdoctoral researcher at the Stanford Center for Biomedical Ethics who was not involved with the study, urged caution in applying its findings to forensics.

“We’ve already seen plenty of examples of how existing facial algorithms have been used to reinforce existing racial bias in things like housing and job hiring and criminal profiling,” Dr. Martschenko said, adding that the study “raises a lot of important ethical considerations.”

Despite the potential pitfalls of linking people’s appearances with their DNA or their behavior, Mr. Malone and Mr. Chasen said the look-alike project, and the knowledge that we all might have a secret twin out there, was a means of bringing people together. The two have remained friends for 25 years; when Mr. Chasen got married last week, Mr. Malone was the first person he called. While not everyone with similar DNA shares such a bond, Mr. Malone said that he saw Mr. Brunelle’s photography project as “another way to connect all of us in the human race.”

The above article appeared in The New York Times on August 23, 2022.